When folding inanimate subjects such as trains, cars and the like, the main objective is accuracy; all the requisite features should be the right size and in the right place. In addition, the folding of mechanical objects lends itself to a strongly geometric approach since curved surfaces are less frequent. When you approach animate objects however, the reverse is true. With animals, birds, flowers etc. the norm is the curved surface and straight lines occur as the exception rather than the rule. Origami is, by its very nature, based on geometry. Every crease we make is a straight line. How then do we reproduce the gentle curves of life from such a linear framework? 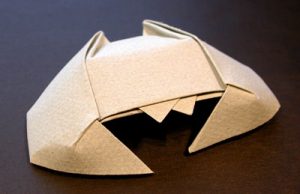 In the past, one of the “rules” of origami was that every completed fold should be capable of folding flat, which resulted in two dimensional representations of creatures. This imposition has been adhered to less and less over the last twenty years and few would now hold it to be valid. Perhaps the spur to move into fully three dimensional folding was provided by the Japanese Master, Akira Yoshizawa. His overriding aim as to capture the “essence” of his subject rather than simply reproduce all the salient features. To do this, he introduced two key concepts; folding softly and wet-folding.

In 90% of all origami books, the folder is encouraged to make each crease as sharp as possible, using his fingernail. This resulted in a very monochromatic view; either a crease was firmly made, or it wasn’t there. Yoshizawa added colour to this view by suggesting that some creases should be made more softly than others. Using this approach, a finished fold could now possess a whole spectrum of creases, from sharp through to very gentle. This offered the chance to be much more expressive when reproducing a living subject.

The technical problem of adding gentle creases is that they do not readily stay in place as the fold is handled. Completed works were therefore very fragile and impermanent. Yoshizawa overcame this by wet-folding; folding with dampened paper which retained its shape when dried. The secret behind this lies in the sizing within the paper. This is a water-soluble adhesive which binds the fibres of the paper together and provides the stiffness. Damping the paper dissolves the sizing, separating the fibres and leaving the paper floppy and malleable. The reverse occurs as the paper dries out, setting the fibres in whatever position you require.

The nature of the process requires paper which has the right properties (ie. soluble sizing) so many types of paper are simply not appropriate to the technique. In general, the thicker types of paper are best, such as artists’ Ingres paper. The only true test is to wet-fold it! As a technique however, wet-folding is still shunned by many folders because of the associated drawbacks. Dampened paper is notoriously difficult to handle and easy to tear. The loosened fibres will separate very easily, especially where several layers need to be folded simultaneously. The paper also expands unevenly in the direction of the fibres, so accurate folding is also a problem. In addition, due to the thickness of the paper, complex folds and large numbers of layers are impossible. 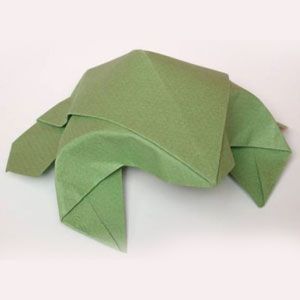 Why then do many of the worlds leading folders persist with the technique? Aside from the ability to mould the paper into a more lifelike shape, wet-folding provides two other main advantages. Firstly, it endows the finished fold with a strength and endurance far in excess of any other method; wet-folded origami can safely be handled and stored without fear of losing its shape, making it ideal for display purposes. Assuming that the sizing and colouring within the paper is chemically neutral, the fold will also last for years, as with many other true works of art. The second advantage is an aesthetic one; there is no substitute for the beautiful appearance of thick paper, especially textured paper.

How to do it!
Start off with a simple fold that you have folded many times using conventional paper. A good subject is one which avoids pointed corners and sharp creases. The larger the square you start with, the thicker the paper you can use. A weight of 170 gm/m is probably an upper limit until you are sure of yourself, but for smaller folds, 100 gm/m is more effective. Try experimenting with different weights to see which you find easiest to work with.

It is perfectly feasible to cut your square before damping, but since the fibres expand in an unpredictable way, you may wish to damp the paper and then cut the square. Try not to add any creases before damping, since they soak up more water and hence tear easily. To damp the paper, use an absorbent cloth and carefully brush both sides of the paper until the sheet is uniformly damp. An alternative method is to use a fine spray from an atomiser.

The key word is damp; not wet! Only experience can really tell you how damp the paper needs to be, but if it becomes shiny, allow it to dry slightly before proceeding. Since the paper starts to dry immediately, the value of knowing the folds becomes apparent; you must fold fairly promptly, using the cloth to re-dampen the paper as and when necesssary. You will soon find that the paper isn’t easy to handle; great care must be taken not to make firm creases unless they are essential.

Once a crease has been made, you can use the warmth of your fingers to partially dry out that area so it will retain its shape for you. Californian master-folder Robert Lang recommends using masking tape to help reinforce weak areas of the paper (such as where  several creases meet) and to hold the paper in position until it dries. The tape can be carefully peeled off later. Since the aim of wet-folding is “animation” of the fold, you should encourage three-dimensionality wherever possible and keep non-essential creases to a minimum. A good example of this is the back, usually formed with a diagonal crease. Instead of creasing the whole diagonal, only add locating creases from which to proceed, then loosely round the back. A consequence of this is that most of your folding will have to be performed in the air, continually shaping and holding, using masking tape if it helps. Once finished to your satisfaction, you can either leave it to dry naturally, or even assist the process with a hot-air dryer.

As you will discover, the feel and appearance of wet-folded origami is impossible to match in any other way, and all the effort involved in the folding will be well worth while. Not only will you have a beautiful and “handleable” fold, but it will last for many years.