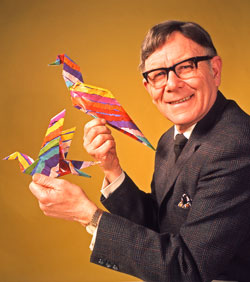 Being a girl who had left grammar school and lived on a council estate, I had no idea how much travelling I would do. In the 40s and 50s life in the UK was a little bleak – so many foods were on ration and few were travelling more than to the town to work! Origami was often the reason that I was going to exotic places and meeting such interesting people.

I had done some folding before Robert Harbin started his sessions on Childrens’ Television in the late 50s; the boat from a tabloid newspaper which could also be a hat, either side to side like Napoleons or fore and aft like a ship’s captain. Our eldest daughter, Jane who was five years old was watching when they said that the w week they would need a square of paper. I duly armed her with this and she was able to follow the instructions for this and the following programme. The third week proved to be a little more complicated so Mum had to follow it and show her later. I must say that Robert was teaching 12-13 yr old children on the programme so she did quite well.