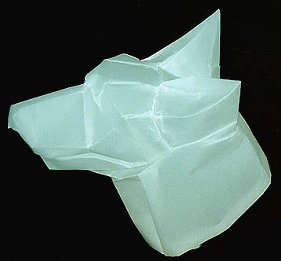 In flat folding, the folds of a model and the model itself are collapsible onto a flat surface. However, some folds, normally formed towards the end, cannot be collapsed onto a plane without having to create additional folds. Examples are the crimp fold and the fold at a corner of a cube model. Whether the folds and the model itself are collapsible or not, the fold lines are straight. In the case of the crimp fold, the fold lines and the surface or surfaces formed by the fold may be curved. The current origami terminology is inadequate for curved 3D origami folds. A convenient and practical way is to borrow the terms applied to the manifolds of Catastrophe Theory, a branch of mathematics.

In Catastrophe Theory, manifolds are used to explain sudden changes in the course of an event due to shifts in environmental factors. The first four catastrophe geometries are 1. Fold, 2. Cusp, 3. Swallowtail, and 4. Butterfly catastrophe. Without going into the mathematics of their geometry, we need only to observe that the Cusp manifold has one cusp point, which is the point of coming together of two folds in a sharp spikelike intersection. The Swallowtail manifold has two cusp points and the Butterfly manifold three. See diagram.

In 3D folding, the fold line of the Fold manifold takes the form of a curve. The fold itself cannot be collapsed onto a plane. Similarly, the 3D paper folding equivalents of the Cusp, Swallowtail and Butterfly catastrophes are made up of curved folds and cannot be collapsed onto a flat surface. The origami 3D Cusp fold has one cusp, the Swallowtail 2 cusps, and the Butterfly 3 cusps.

The use of 3D folds extends the scope of origami and enhances it as an art form. Combining 3D with flat folds produces origami models with less angular and more sculpture-like look. 3D folds are incorporated in several of my origami models, such as the dog bust.