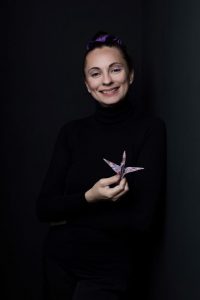 Zulay Sayalero is a chemical engineer from Venezuela.  Read on for Zulay’s story of how she came to be involved with origami and BOS…

When did you first join BOS and why?

In 2010, after my daughter was born, I was suffering with very poor mental health.  Whilst in hospital I started to fold an Origami frog that I learnt when I was a child, with my brother, and in a short time I had a frog jumping around the table. The patients there quickly asked me to do a jumping frog for them to which I replied ‘I will teach you how to make one’. In that instant, we shared a moment of clarity, and my passion was reignited. After leaving hospital I decided that I wanted to learn more Origami and decided to join the BOS in 2011.

What do you like most about BOS and can you share any moments/events that you have really enjoyed?

Since joining BOS, I have found a lot of support and formed a lovely friendship with Penny Groom who was the Membership Secretary at the time.  I greatly enjoy going every year with my daughter to the BOS conventions where I always meet likeminded people and have an fantastic time folding with others!

Tell us an anecdote, fact or news involving origami

A year later, in 2012, I was back at the same hospital but this time as a volunteer teaching Origami to the patients. I also developed a love for other crafts, later becoming a craft tutor. Origami has always been my first passion and I regularly teach it to the vulnerable in my community. In 2017, together with Origami friends and fellow BOS members Angela Loveridge and Dr Lizzie Burns, we set up a social enterprise, Origami Pulse CIC, with the mission of  Improving Life, one fold at a time.