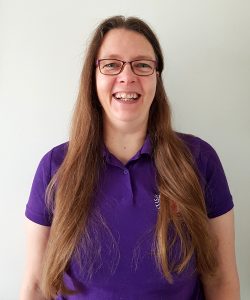 Steph joined the BOS in 2015 and her first BOS conference experience was the 50th anniversary event at Stratford in 2017, she enjoyed it so much, she has been to every conference since then!  Read on for Steph’s story…

When did you first join BOS and why?

It was from the back of the book Mathematical Origami that I heard of the BOS but at the time I was busy with a young family so I didn’t give it much thought. It was years later, when I was searching the internet for some model or other, that the BOS popped up. I dithered for a bit and finally joined in 2015.

What do you like most about BOS and can you share any moments/events that you really enjoyed?

I liked the sound of the things I read about in the magazine but was apprehensive about going to a conference as I didn’t know what to expect, “would I be good enough?”.  Then the 50th anniversary BOS event came up.   The timing was perfect – my children were now in their late teens – I could risk leaving them for the weekend (from what I hear the house party was a remarkably civilised affair, and they certainly had it all cleaned up by the time I got home!) and the lure of Lang, Fuse and Jackson as guest speakers was strong.  I took the plunge and booked.  I was apprehensive I admit, not just about the folding, but I hadn’t travelled alone for many years.

I need not have worried.  Within minutes of arriving at the hotel in Stratford I was welcomed to a table in the bar and we were chatting and folding away.
That is the great thing about the BOS: the people.  Though I have met many over the years who have been impressed by the things I make, I hadn’t met many fellow folders.  This all changed that weekend.  Everyone I met at that conference was friendly, patient and eager to share their ideas, time and paper.  I enjoyed it so much I’ve been to all the conferences since!  Other opportunities have followed, mini meetings, teaching at London Comic Con and the Matsuri.

Until I joined the BOS folding was a somewhat solitary journey now I have friends to chat too and bounce ideas off along the way!

Why does origami appeal to you and how long have you been into it?

I love the way a simple flat piece of paper can be transformed into something to amaze and delight.  I have never been good at sitting still and waiting.  Doctors surgeries, train journeys, waiting for job interviews: in situations like these, if there is no one to chat to, I find I need something to occupy me.  Also, as a Mum, I have often had to wait in such places with children who are easily bored.  Origami is perfect. It’s an ‘any time anywhere’ craft!  I almost always have a piece of paper about my person or can obtain one nearby (I would like to take this opportunity to thank all those institutions who’s information leaflets I have transformed).

I became interested as a child in primary school.  I used to make fortune tellers and that snapping head that can be made from the simple boat.  I was given Rupert Annuals around this time too and, although I can’t remember the bear’s adventures, I do remember making a sleeping face model!

Which are some of your favourite folds. models, books or origami designers, and why?

In my teenage and university years I was folding models from books (mostly borrowed from the library).

The first book I bought was Eric Kenneway’s Complete Origami – it has a bit of everything, history, facts and models from the easy to the complex. I was taken by the antelope on the back cover and couldn’t wait to get stuck in to the jack-in-the-box inside. I got the opportunity to meet Max Hulme (the designer of the Jack-in-a-box) at my first convention and thank him for a wonderful model.  You need a bit a time and a fairly large piece of paper but it’s worth it.

The next book I bought was The Ultimate Papercraft and Origami book by Paul Jackson and Angela A’Court.  I was amazed by the paper ball “Electra” on the cover (I didn’t know words like modular and kusudama then) and HAD to learn to make it. That model was an instant favourite;  the units are fairly simple; it holds together very well (it can be handled and displayed without the need for glue) and I think it is really attractive. I have made so many of these over the years, they are adorning the houses and desks of my friends and relatives the world over and I usually leave one in hotels and holiday homes when I check out. It was designed by David Mitchell he is my favourite designer. I have several of his books, Building with Butterflies, Paper Crystals and Mathematical Origami.

Since joining the society the spider by Rikki Donachie is one that’s caught my attention. My non folding friends are very impressed by it and I have had several requests, especially around Halloween!