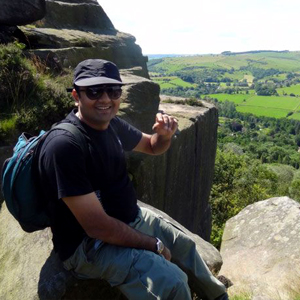 1. What do you like most about BOS and can you share any moments/events that you really enjoyed?

I first met the BOS folk at Wentworth at a mini meeting in 2012. Nick had graciously invited me, put me up in his house and later we traveled the countryside meeting folders over a week. Each person was warm and left an indelible impression on me. It was my first experience of meeting the Origami community outside my own country and has been instrumental in my desire to be a part of this welcoming, encouraging community. Dave and Nick have been the closest of my Origami friends from BOS.

2. Why does origami appeal to you and how long have you been into it?

I have been folding since 1989. It appeals to me because it's been my constant for over 3 decades in a world of variables. Call it meditation, stress buster, security blanket or left-right brain synergy, it's become an innate part of me now and I can't imagine a day when I would not like to fold paper.

3. Which are some of your favourite folds. models, books or origami designers, and why?

We are living in the Origami renaissance right now. Spoiled for choice, really! If I had to, I'd choose Joseph Wu, John Montroll, Hideo Komatsu, Dave Brill and Won Seon Seo as my ideals because of expression and technique. In terms of simplicity, Giang Dinh, Fabian Correa Gomez and Nick Robinson are at the pinnacle of communicating emotion with minimal layers. There's so much more to learn from so many great artists!