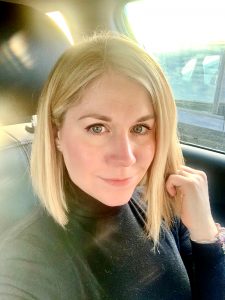 1) When did you first join the BOS and why.

I first joined the BOS back in the 90’s I was 13/14 if I remember rightly and had been into origami for a few years by that point, I learnt about BOS searching for origami diagrams online. My parents never had to worry about leaving me unattended on the internet, they new I was just scouring it for origami information and new designs to fold. So when I came across the BOS website I knew I wanted to be a part of the community. After a rather long sabbatical I rejoined last year.

2) What do you like most about BOS and can you share any moments/ events that you really enjoyed?

Since my early membership days I was desperate to attend one of the conventions but my family’s limited income meant that was not to be. you can imagine how gutted I was to miss the online conventions last year. Being part of the live fold alongs for world origami day was a fun experience. My girls were banned from talking to me so that I could focus on what was going on. I really enjoy reading through the magazines when they arrive and seeing what’s going on in the world of Origami.

3) Who inspires you in the world of Origami and why?

There are so many people that inspire me in different ways, too many to mention them all by name here! It is one of the things I love about Origami. The creativity and originality astounds me on a daily basis. Akira Yoshizawa was an origami God. I desperately wanted to meet and fold with him in my youth. In the early days of dial up internet, Joseph Wu’s website was always one of my first ports of call, he was folding in a way I hadn’t seen before and I was really taken by his style. Jeremy Schaefer was another. I loved how original witty and refreshing his designs were. Paul Jackson’s books were instrumental in my learning early on, I think half of my books were written by Jackson at one point. Robert Lang’s The complete Book of Origami was another level for me when I first saw it. I friend donated a copy of it to me when I was 11, people have donated a lot of origami books to me over the years. Being able to fold Lang’s cuckoo clock came with such a feeling of accomplishment and satisfaction. Pinterest and Instagram have been an eye opener into how the world of origami has exploded over the last few decades and I am blown away by peoples talent. Naomiki Sato’s roses are stunning he has such a delicate touch that I am trying so hard to master myself. I would be over the moon to receive a bunch of roses from him 😁

4) Why does origami appeal to you and how long have you been into it?

When I was 8 a Japanese girl named Saki moved into my class at school. We instantly hit it off and became best friends. Saki is responsible for my love of manga and also origami so hats off to her. She would fold me things out of paper, a cats face, a bird, finger puppets. These little models became my treasures taking pride of place on my mantle piece, so for Christmas that year my parents gifted me “Paper folding fun, Origami in Colour!” And a huge pad of the thickest craft paper known to man. Every photo from that Christmas has me tucked away in the background folding my way through that wonderful magical book. From the ages of 11-16 I was predominantly housebound through sickness and origami became my refuge, there is something so meditative and calming about losing yourself in folding a model, and ever since, folding one of my well remembered designs has proved a means of escape mentally from whatever worries there are going on in the world around me.

5) Which are some of your favourite folds or models and why?

I could be here all day talking about favourite folds. There are so many and for different reasons.

Kawasaki’s rose was a bit of a Grail fold for me,  so elegant and so clean. I only managed to fold it for the first time last year after watching a tutorial on YouTube. Prior to that something about the design alluded me, I could not figure it out. Folding my first Kawasaki rose was a beautiful moment indeed. So thank you to the wonderful people who post tutorials on YouTube!

I remember there was a Tyrannosaurus Rex skeleton on the front cover of BOS many moons ago (I can’t remember who the designer was) but being a dinosaur fanatic and having my 2 worlds collide like that in such a breathtaking way was quite something.

6) Any tips you can share on folding, designing or teaching origami.

I’m an amateur at best when it comes to origami, I fold because I love to fold and I’m sure as my children get older I will find the time to fold more often, and try the more taxing designs I’ve been squirrelling away. so I guess do now my advice would be to enjoy it! I stopped folding for a long time because someone I admired a lot criticised it and me at a class I was teaching in a youth group when I was teenager. I missed out for many years doing what I love because I felt silly and foolish for enjoying it. Luckily with age has come a lack of concern for the opinions of others. If origami makes you happy. Do it. Even if your models aren’t perfect or you don’t find yourself able to create your own unique designs, or you don’t have the fancy paper you see others using. If you enjoy it. Do it. Fold what you enjoy folding, With whatever paper comes to hand.

7) What other skills, interests or experience do you have that might be of interest to members.

I’ve worked with children and teenagers for many years, originally through volunteer work at church and more recently as a teaching assistant in a primary school, this has leant me a plethora of opportunities to teach origami to young people of all ages which has always been great fun and has forced me to look at folding from a beginners point of view,though to be honest their main requests are usually to do with paper aeroplanes which I’m always getting into trouble with the other teachers for folding.

I am an artist at heart and so I dabble in lots of different creative pursuits aside from origami and also enjoy cooking and baking. I worked in law prior to having my girls but have spent the last 15 years as a wife and mum so volunteering at my girls school as a classroom assistant was my tentative first step back out into the world of working adults. I’m a keen gardener and love to grow vegetables and flowers.

8) What would you do if you were in charge of BOS for a day?

Probably raid the library, I love a library and the thought of one full of Origami books gets my heart racing. I would also look into opening an origami museum; wouldn’t that be amazing having a collection of the most beautiful models and designs all in one place for people to come and see and enjoy and to run workshops and seminars there… but I’m running away with myself.