The 1955 Exhibition By Akira Yoshizawa

The Art of Akira Yoshizawa

The Books Of Akira Yoshizawa 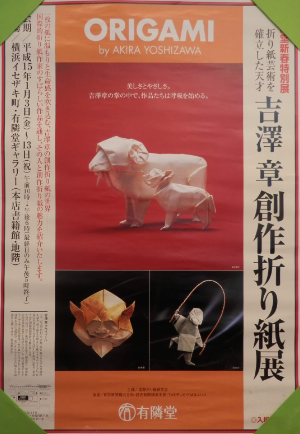 Welcome to the British Origami Society Devoted to the art of paper-folding, also known by its Japanese name “origami”. We have hundreds of members worldwide Explore Begin your journey into the world of origami LEARN TO FOLD A selection of free diagrams and video tutorials to get you started SIMPLE ORIGAMI Join the society Take […]

History of The Society

The History of the Society The Early Days of the BOS Part One. ‘How about you, Mike?’ (Mick Guy remembers a day in the sixties when the BOS was formed) On the afternoon of Saturday 28th October 1967, a group of eleven people sat around a table in a room at the prestigious Russell Hotel […]

The Lister List David Lister The late David Lister of Grimsby, England, was recognised as one of the foremost sources of information regarding the history and culture of paper-folding. With his permission, we are presenting some of the highlights of his messages to the origami-l and BOSmail mailing lists, which we hope you will find […]

Who Honours The Society values the efforts of volunteers and has a number of ways of recognising the time and skills that help keep the BOS running. Here are those who have been formally recognised. Sidney French MedalsPresidentsVice PresidentsHonorary MembersIris Walker AwardDavid Lister Award Dave Brill Secretary, Chair, creator, origami embassador David Venables – Supplies […]